Children in Prayer in Jerusalem, Israel and Papua, Indonesia 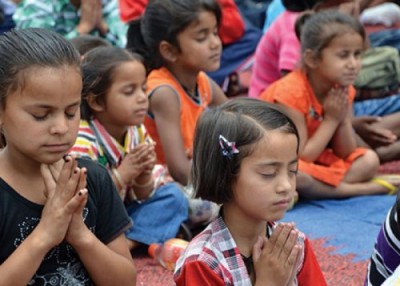 1) CiP Track: Jerusalem House of Prayer for All Nations

Led by Ps. Ir. Tety Irwan, M.Th., Leaders of Children in Prayer (CiP) International and also Pastor of Salt and Light Community Church (SLCC) in Indonesia with a team of five from Indonesia.

There were 70 children participating altogether. Children came from many nations: Israel, Indonesia, Korea Selatan, Malaysia, Papua New Guinea, China, Taiwan, India, Japan, USA, Latvia, Ukraine, Germany, Ethiopia, Honduras. We could see how the children's track has gone to the next level; the children received the heart of David and the harp and bowl style in their heart was full of heavenly joy. Some of the children learned how to blow the shofar in praise, worship and prayer times. Really an amazing time!!!

The children were very excited to learn about prayer, praise and worship (harp and bowl). They know that they are a House of Prayer for all Nations, that their prayer will transform the nations. They learned how to be watchmen in the end time age. Everyday, they participated in praise, worship and watchman time. They also did the fast in Yom Kippur with adults and young people. They prayed for the peace of Jerusalem, the Middle East, the nations and the fulfillment of the Isaiah 19 highway vision. Every kids got a passport for the nations. Every session the children prayed for one of the 12 gates. They got a stamp after they finished praying for one of the gates. They also did prayer walks.

We did training, 13-14 October, for 300 Sunday School teachers and pastors from 39 denominations in Jayapura City, Papua. 2 days of training were about Children in Prayer : Why we teach children to pray, How we raise up children in prayer, Curriculum Kids Prayer, how we do the kids prayer class and a concert of prayer for kids. We taught mission to kids, using Curriculum Mission for Kids. We also taught them Creatif and Maximize Children Ministry. There were also Regional Discussion Groups on how to follow up this training with an open children’s prayer class with the material (8 sessions).

We believe spiritual changes happened in Papua after the children’s prayers. They also prayed for the government in Papua; for Indonesia and the children who have special needs and also for street children. They prayed for the nations with a world giant map. Kids were really enthusiastic and ran to the stage in the concert of prayer. They prayed for revival in Papua Island, Indonesia, and the nations. We also taught the kids to sing "House of Prayer for all nations". Some of the kids were in tears when they prayed.

After the training and crusade, the Television of Papua/TVRI broadcast the seminar -Day 1, How to raise up children in prayer, and Day 2, how to raise up mission kids and also our teaching about salvation and the concert of prayer. TVRI Papua broadcast this program to all 44 districts of Papua, also in villages. Please pray the CiP Movement that what happened in Papua Island will be for God's glory. Joel 2:28, Psalm 8:2.

This email address is being protected from spambots. You need JavaScript enabled to view it.

Tagged under
« Prev Next »