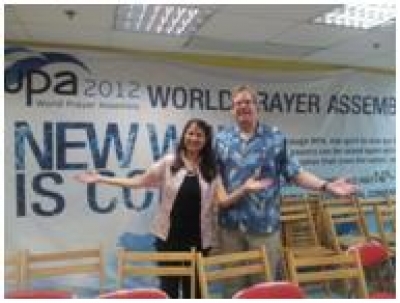 Last month, about 300 from China and Hong Kong participated in a training consultation to raise up children and youth in prayer across their vast land and population (350 million under 18 years of age, what a challenge and opportunity!). It was exciting to see how they caught the vision from Pastor Tety Irwan and her colleagues on the international CiP facilitation team that also led that track during the World Prayer Assembly.

Pastor Gloria Au Yeung and her team also arranged for prayer leaders and intercessors from China's 32 provinces who want to connect in a movement of transformational prayer to come together for this purpose at the new house of prayer she and her church have established in Hong Kong. These Chinese leaders were full of joy and fire, and it was a great privilege to pray with them and hear their visions for their land. Some have served prison terms for their faith already, and they mean business for the Lord and the prayer movement.

It was great to witness this part off the “New Wave” from the World Prayer Assembly affecting things here at the one-year anniversary of the WPA. Please see the banner at the back of the room as well as the grinning 76-year old man who remembered to wear his WPA shirt on its anniversary!